The ratification of the Carter-Torrijos treaty avoided further unrest in Panama.

"The American people are fortunate that the Panama Canal Treaties were negotiated and approved...I believe most Americans have no idea how close we came to disaster"
(Source: Former Panama Ambassador Jorden)

"Under most circumstances, it is difficult for a superpower to design a long-range foreign policy that diminishes its hegemony, even though that reduction is in its national interest"
(Source:The 1977 Panama Canal Treaties: the non-issue issue by: William L. Furlong)

"The ratification of the Treaty demonstrated the goodwill of the American people for their neighbors in Latin America."
(Source: The Presidential Timeline)

Many Senators who supported the Carter-Torrijos treaty lost their Senate elections in 1978.
Source: Global Atlanta 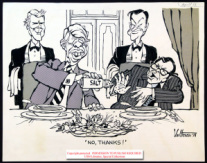 In 1980 in response to the Soviets' Afghanistan invasion, when Carter asked the Senate to table the SALT II Treaty, he encountered stiff political opposition because it was perceived as part of an overall reduction of American power similar to the effect of the Carter-Torrijos treaties.

"The president said we must ratify the SALT II Treaty because no one will like us if we don't. He said we should give away the Panama Canal because no one would like us if we didn't. It is time to tell the President : We don't care if they like us or not. We intend to be respected throughout the world." -Reagan.
(Source: Panama Odyssey, William Jorden)