Public opinion polls conducted by NBC showed that 61% of the public opposed giving Panama control of the Canal while only 30% approved the transfer. 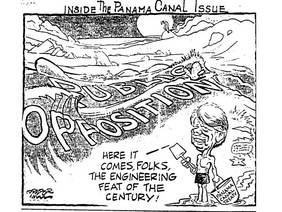 See document below for some of the public's concerns.

Source: Jimmy Carter Library
Presidential Assistant Joseph Aragon wrote to Hamilton Jordan (Chief of Staff) “Anyone familiar with this country knows that educating 230 million Americans on an issue, no matter how vital, is an enormous undertaking. In the case of the treaties, the problem is especially acute in that a great deal of misunderstanding has been produced through distorted rhetoric and demagoguery”. (Limits to Victory, George Moffett III, page 75).

George Gallup summarized the public opinion in this press release, which demonstrates that people knowledgeable about the treaty are more likely to support it. 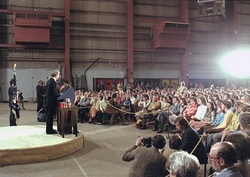 Source: Jimmy Carter Library
1. Department official Dean DeBuck: "This was the first time we had such a big effort on a single issue. Normally we just respond to requests when they come in. On Panama we solicited events. We plugged into even the most marginal events."- Limits Of Victory, George Moffett III, page 80

3.“New Directions (an organized foreign policy lobbying group) sent out a 1.1 million mailing to liberal supporters asking for support of the Canal Treaties." - David Skidmore, Jimmy Carter and the Battle over Ratification of the Panama Canal Treaties.

4. “Council of the Americas, a group representing 200 major  corporations...produced and distributed pro-treaty pamphlets, met with senators and opinion leaders, and courted broader business support… " - David Skidmore, Jimmy Carter and the Battle over Ratification of the Panama Canal Treaties

5. "Another semi-private elite organization involved in the campaign for treaty passage was the Committee of Americans for the Canal Treaties (COACT), which consisted of prominent political leaders." - David Skidmore, Jimmy Carter and the Battle over Ratification of the Panama Canal Treaties

6. "The president himself met with former president Ford and former secretary of state Henry Kissinger and made personal appeals for support to many high ranking business and labor officials and foreign policy experts." - Limits Of Victory, George Moffett III, page 81

7. The President delivered a fireside chat on national television on the eve of the senate floor debate.

8. President Carter held town hall meeting to address public concerns.
"This is an issue that I think is very important. It is obviously of crucial importance here in New Hampshire. We have to get as you know a two-thirds vote in the Senate. There is no political benefit to be derived by me or any member of the Senate in voting for the Canal Treaties themselves. I think the Canal Treaties negotiated are good. I think they are better for our own country."
- President Carter