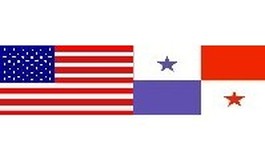 "Coming so soon after the U.S retreat from Vietnam, the question of giving up the waterway became inextricably entangled with the matter of American strength and pride - of patriotism vs surrender." - Edwin Warner, Time Magazine ( Oct 31, 1977)

"We built it, we paid for it,it's ours, and we should tell Torrijos and company that we are going to keep it" - Ronald Reagan

"stand brave and firm for freedom in this real world or spreading Communism or crawl into historical obscurity in the face of the hysterical howling of world opinion" - New Hampshire governor, Meldrum Thompson

"One more crucial American step in a descent to ignominy - to the end of America's credibility as a world power in deterrent to aggression." - New Right spokesman Phillip Crane 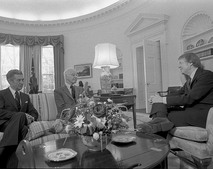 "the long standing dispute between the United States and Panama over the status of the canal significantly affects the relationship between this country and the entire Third World, since the nations of the Third World have made common cause on this issue - looking upon our position in the canal as a last vestige of colonial past which evokes bitter memories and deep animosities."  - Sol Linowitz

"These treaties... are, above all, a triumph for the principle of peaceful and constructive settlement of disputes between nations. That is the principle we seek to apply in all aspects of American foreign policy." - Secretary of State Cyrus Vance.

"The most important reason - the only reason - to ratify these treaties is that they are in the highest national interest of the United States and will strengthen our position in the world." - President Carter